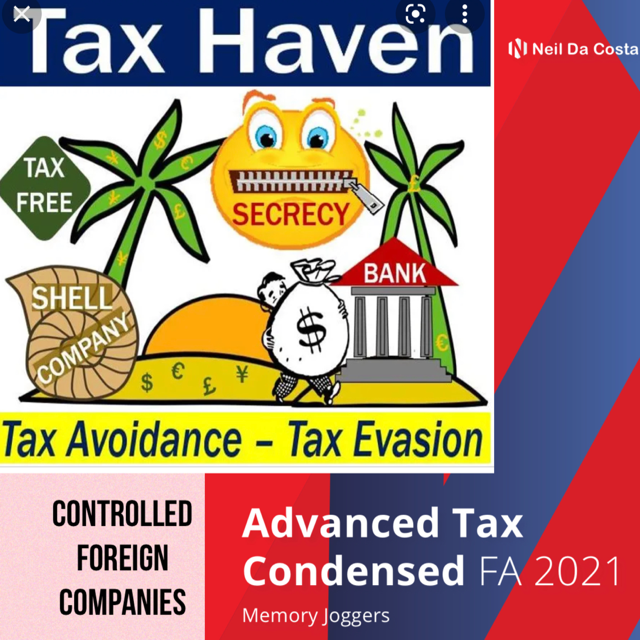 What does HMRC do if a UK company sets up a sub in a tax haven to divert profits away from the UK?
Under the Controlled Foreign Companies (CFC) rules, the UK company is taxed on a CFC tax charge which is based on its share of the CFC profits diverted from the UK.
A CFC is defined as an overseas resident company that is controlled by UK resident companies. Control means ownership of 51% share capital or voting rights
The CFC tax charge at the current rate of 19% is added to the UK company’s corporation tax liability.
The UK company can always claim double tax relief based on the lower UK and overseas tax to compensate for the overseas tax paid.
Double tax relief can be claimed even if there is no double tax treaty as HMRC offers unilateral relief.
The important point to remember about CFCs is that in most exam questions a CFC tax charge can be avoided by claiming an exemption.
If the CFC has trading profits of not more than £500,000 in a 12-month period, by claiming the low-profit exemption, there is no CFC tax charge.
Another exemption that can be claimed is the tax exemption. If the tax rate in the overseas country is at least 75% of the UK rate, there is no CFC tax charge.
19 x 75% is 14.25% so as long as the rate of tax is 14.25% or more, the tax exemption can be claimed.
Controlled Foreign Companies is regularly examined in the Advanced Tax exam including the March 22 exam.
Why not master the technical content by using my Advanced Tax and Tax Condensed notes?
The books are relevant for all tax exams from June 2022 up to March 2023 and make learning the vast tax syllabus manageable and more efficient by focusing on keywords. You will also get lots of free additional resources.
You can purchase these amazing fun innovative books using the links below:
https://lnkd.in/dPE6vaV
https://lnkd.in/dt6qQ9dQ
#taxaviodance #learning #taxhavens #neildacosta #condensednotes