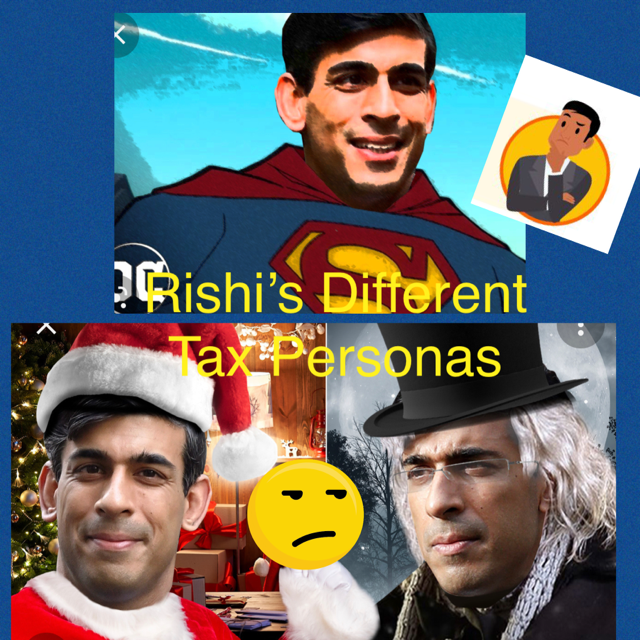 During his tenure as Chancellor, Rishi has taken on different tax personas.

In a bid to help the hospitality industry, he introduced the popular ‘Eat Out To Help Out’ scheme where the treasury picked up half your food tab when you ate out in a restaurant.

With business grants being dished out to all and sundry, he was seen as a popular Santa Claus and the media portrayed him as a Santa Claus!

He then introduced the revolutionary super deduction on new main pool additions (except cars) of 130% in capital allowances. This meant that the annual investment allowance could now be used for the special rate pool items in preference to the 50% first year allowance.

In so doing, Rishi had achieved every boy’s dream and he was seen as Superman!

However, his final legacy was to introduce a triple whammy with the increase in national insurance, increase in the income tax rate for dividends and a huge 6% increase in corporation tax coming in 2023.

This was announced in time for Christmas and Rishi found that his previous adoration had turned to bitter resentment.

‘Small businesses see the increase in national insurance as an anti-job, anti-small business, anti-start up manifesto breach ‘said Mike Cherry (Chairman of the Federation of Small Businesses) when speaking to the Economics Editor of The Times, Philip Aldrick. According to Kitty Ussher at the Institute of Directors, this will ‘add an extra burden to business’

Rishi had finally made a transition from Santa to Scrooge!

He was then involved in a debacle over his wife saving tens of millions in tax  through claiming the remittance election due to her non-domiciled status.

As a tax professional, I felt that Rishi was able to make big changes to the UK tax system, but I do not like high taxes on businesses. Entrepreneurs take risks so should be rewarded with lower tax rates.

Ironically, Rishi may be remembered not for his tax personas but for administering the coup de grace to Boris Johnson. Once he resigned as Chancellor, Boris was doomed.

It was a classic Julius Caesar moment, where Boris saw his loyal friend amongst his assassins and asked ‘Et tu, Brute?

We certainly have not heard the last from Rishi as he launched his bid to be our next Prime Minister especially as tax remains a political hot potato.

These books will really make a difference. You can purchase them using the links below: