What Was Tyson Fury’s Uppercut Worth After Tax ?

What Was Tyson Fury’s Uppercut Worth After Tax ? 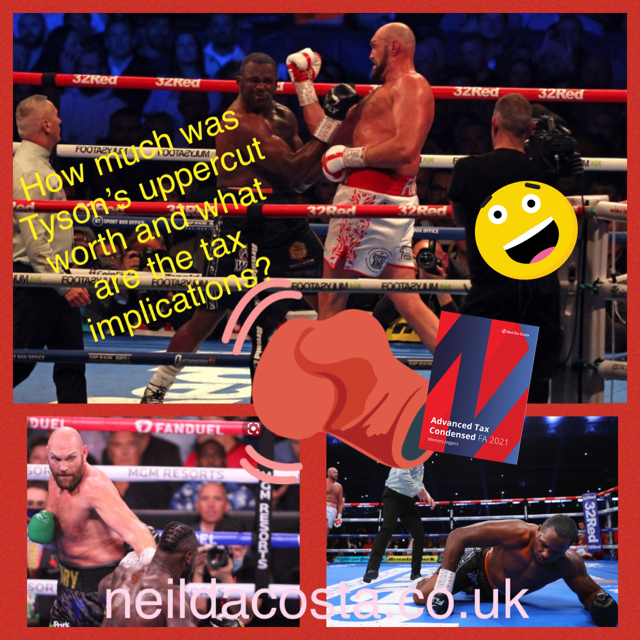 Tyson Fury’s amazing uppercut which earned him a technical knockout against Dillian Whyte made him the richest British boxer of all time. Tyson is a virtual giant at 6ft 9 inches, and his long reach makes him impossible to beat.

The fight was watched by a record 94,000 fans at Wembley Stadium and was hosted by another British legend, Frank Warren. Frank Warren won the purse bid with a record £30 million bid.

Tyson Fury Ltd has three main activities – making investments, merchandising/promotional events and finally pugilist earnings that Tyson gets from his fights. This is excellent tax planning as it shows that the company has different forms of income and cannot be viewed as a personal service company subject to the IR-35 rules.

In 2021, despite the company making £40 million from his winning fights against Deontay Wilder, Tyson only paid himself dividends of £70,000 and instead invested £6.5 million. He is content to live a relatively frugal life, leaving over £40 million in the company accounts. In the prior year, he only took out dividends of £2,000 to utilise his nil rate band.

Tyson has not engaged in more sophisticated tax planning such as transferring shares to his wife or family members to utilise their personal allowances, dividend nil rate bands or basic rate bands.

In so doing, after the earnings being subject to corporation tax at 19%, there is no double charge on the extraction of profits as a dividend.

In terms of his own main residence, in 2021, Tyson purchased a home at a cost of £1.7 million in his own and his wife’s name to benefit from the principal private residence exemption.

The £24.5 million from the Dillion Whyte will be taxed at 19% to leave after tax income of £19.8 million increasing the cash reserves of the company to £60 million. Tyson is in no hurry to withdraw the dividends and in his interview with Piers Morgan said that he has got enough of everything he needs. Instead, the Gypsy King plans on spending more time with his family after devoting the last 10 years of his life to boxing.

If we are to believe his retirement from boxing, he becomes only the second man in history to retire undefeated after the legendary Rocky Marciano.

I am certain there will be plenty of promoters and fans who will try and coax him to fight Oleksandr Usyk or Anthony Joshua for a final pay day.

However, Tyson’s sound tax planning means that he is in a strong financial position with a £60 million cash mountain and is no hurry to get back into the ring.

Why not master the tax technical content by using my Advanced Tax and Tax Condensed notes?

The books are relevant for all ACCA tax exams from June 2022 up to March 2023 and make learning the vast tax syllabus manageable and more efficient by focusing on key words. You will also get lots of free additional resources.